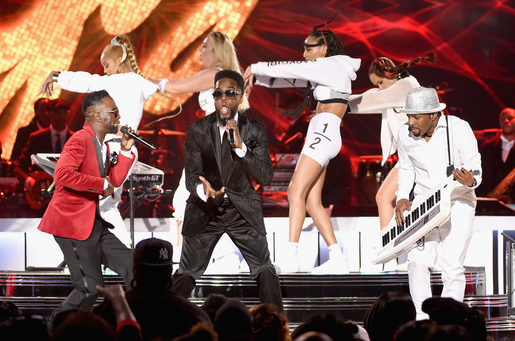 The Soul Train Awards, the biggest night in R&B and SOUL took place once again in Las Vegas at The Orleans Arena.

BET & Centric celebrated and honored R&B legends and soul music’s brightest new stars, and the comedic and soulful Erykah Badu returned to reprise her role as the host.

Badu once again slid with ease between comedic host and soulful songstress as she cracked a few jokes, gave out Internet Soul Sensation awards, as well as took the stage to perform D.R.A.M.’s hit collaborative single with her, “Wi-Fi.”

Soul Train’s fan-favorite Soul Cypher also returned this year. This year the cypher stole the hearts of R&B fans as it featured Badu as the DJ with vocalists Tyrese, Gladys Knight, Angie Stone, and Neyo. The cypher mirrors the cyphers of the BET Hip Hop Awards.

One of the most legendary and iconic singer-songwriters and producers of our time, Teddy Riley, was honored with the Soul Train Legend Award and celebrated with an all-star tribute that included performances from Guy, Bobby Brown, Doug E. Fresh, Wreckx-N-Effect, V. Bozeman and Tito Jackson.

The soulful songstress Jill Scott returned to the Soul Train Awards stage to pass the torch of the Lady Of Soul Award to Brandy. Scott even sung a bit of “I Wanna Be Down” with the audience on background vocals prior to bringing Brandy to the stage. Before Brandy took the stage to perform her hits “I Wanna Be Down,” “The Boy Is Mine,” “Full Moon,” and more, she was presented with a special tribute video that featured the legendary Babyface, and artists Jazmine Sullivan, Jhene Aiko and more speaking to Brandy’s unparalleled vocals, dedication, and longevity.

Brandy brought everyone to their feet as she took everyone in attendance down memory lane with hit after hit. She was even joined on the stage by MA$E, as she performed “Sitting On Top Of The World.”

Teddy Riley certainly came to JAM with his tribute medley. The legend not only performed his own hits, but he also performed the hits he produced for others such as Johnny Kemp’s “Just Got Paid,” Wreckx-n-Effect’s “Rump Shaker,” and Michael Jackson’s “Remember The Time.” It was the first time Guy reunited onstage in years, and they had the crowd going wild with performances of their hits “I Like,” “Groove Me,” and more.

Before all of the show action, AllHipHop.com’s Rea Davis caught up with Teddy Riley, Tank, BJ The Chicago Kid, D.R.A.M., and more on the red carpet. Check out the video below!

The Soul Train Awards airs tonight at 8PM ET/PT on Centric and BET.

Trav talks about his new music with Tory Lanez, his relationship with Meek and his recent feuds with Young Chop and 50 Cent.

Ninth Prince gives an update on why the group emerges now with a new album and even a Killa Sin update.