(AllHipHop News) The man behind the boards for Tupac Shakur’s 1996 LP The Don Killuminati: The 7 Day Theory is looking for financial backing from the late music icon’s fans.

Tommy “D” Daugherty worked as the chief engineer on the posthumous Pac project also known as The Makaveli Album.

Author Ben Leinen is teaming with Tommy D for a Kickstarter campaign to fund a book about his experiences creating with Shakur and the rest of the Death Row Records roster.

“In 2013, I met Tommy while he was visiting his late father in Cedar Rapids. I discovered who he was and he mentioned he wanted to do a book for a long time,” writes Leinen on the KS page.

According to Leinen, Tommy was never paid for his contribution to The Don Killuminati.

“He hasn’t been able to talk because he’s been #StrandedOnDeathRow. He worked for the record label giant until 2007 – the last original member,” Leinen states. “Tommy D was one of the last people to take care of Nate Dogg and built him a home studio before he died!!!”

The Makaveli Book will also include stories about other music acts such as Nate Dogg, Snoop Dogg, Lady of Rage, Prince, Michael Jackson, and more.

Some of the pledge rewards for Kickstarter donors include signed copies of the books, a deleted chapter, an online personal thank you, a Death Row cassette, and a thank you in the book. 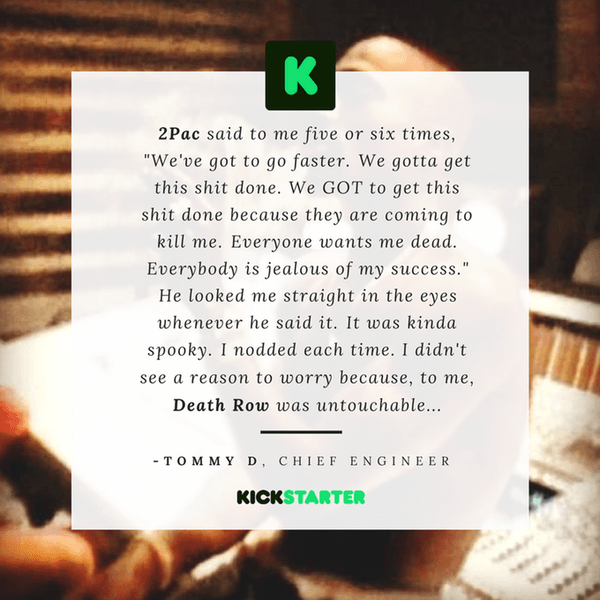 Suge mixing with us at Can-Am Studios
Get The #Makaveli Book
By Tupac’s Chief Engineerhttps://t.co/Ha080N8Eot pic.twitter.com/7903dLbcBf
— Tommy D (@tommyddaugherty) July 7, 2017

One of my favorite albums I did
G-Funk with Nate Dogg
Get The #Makaveli Book
By Tupac’s Chief Engineerhttps://t.co/Ha080N8Eot pic.twitter.com/7B5pwLhAM5
— Tommy D (@tommyddaugherty) July 7, 2017

Just a few of the albums I’ve worked on:
Get #TheMakaveliBook
By 2Pac’s Chief Engineerhttps://t.co/Ha080N8Eot pic.twitter.com/PjeY8uUzSh
— Tommy D (@tommyddaugherty) July 6, 2017

Kelly Rowland, Terrence J, and Regina Hall will serve as hosts for the "Saving Our Selves" broadcast.