(AllHipHop News) Azealia Banks is back at it again attacking other artists on social media.

The Harlem-raised entertainer had some choice words for fellow New Yorker Nicki Minaj via Facebook.

Nicki girl….. now listen. Don’t start throwing shade cause you miss safaree and know that I’ve actually made a BANGER with him.
Don’t get mad, get even. Slim down a bit (especially in your neck and arms). Decrease the butt just a bit (I’ve seen your butt make some really expensive dresses look really cheap) and STOP WEARING SPANDEX AS AN OUTFIT FOR F-CKS SAKE. Also stop calling yourself the queen of rap. Queens don’t wear spandex sweety. Marketing genius yes, but your cheap made in China perfume smells like car freshener and your beverage tastes like kitchen cleaner.
McDonalds sells a lot of burgers but no one is telling McDonald’s that they’re the pinnacle of cuisine and taste. This is true of you.
You run around the meadow collecting all the low hanging fruit so you may turn around and congratulate yourself for having the most fruit, but all of the fruit is mealy and mushy.
I don’t understand why you are so impressed with yourself.
Do yourself a favor and image search gaga 2011 and pick that back up! This “real” Nicki is not as interesting as Gaga-knock off Nicki.
GIVE THE GIRLS WHAT THEY WANT.
And stay tuned for my joint with your man.
I really think you’re gonna love it !
In 2017 I hope you find some new inspiration and decrease your butt implants you would honestly look SOOOOO much better if they were just 150cc smaller.
Cheers to female rap!
Happy Holidays!
-Azealia

Banks removed the message and explained why she took it down in follow-up FB posts.

“Deleting posts as I am not the same person I was two hours ago. LOL,” stated Banks. “Hope you Lot got your screenshots. It’s all jokes guys. Calm down and enjoy the holiday.”

The initial online attack seemed to be a response to Nicki’s The Empire video game supposedly dissing Banks.

There is a section of the interactive game where a character mentions a “mermaid song” and an album titled Fan2Sea being “really loud, obnoxious screech that goes on for hours.”

Banks has a 2012 mixtape called Fantasea which features a mermaid on the cover.

This is not the first time the two female rappers have been involved in a public spat.

The Nicki-Azealia on-again, off-again feud has gone on for years with most of the negative commentary coming from Banks. 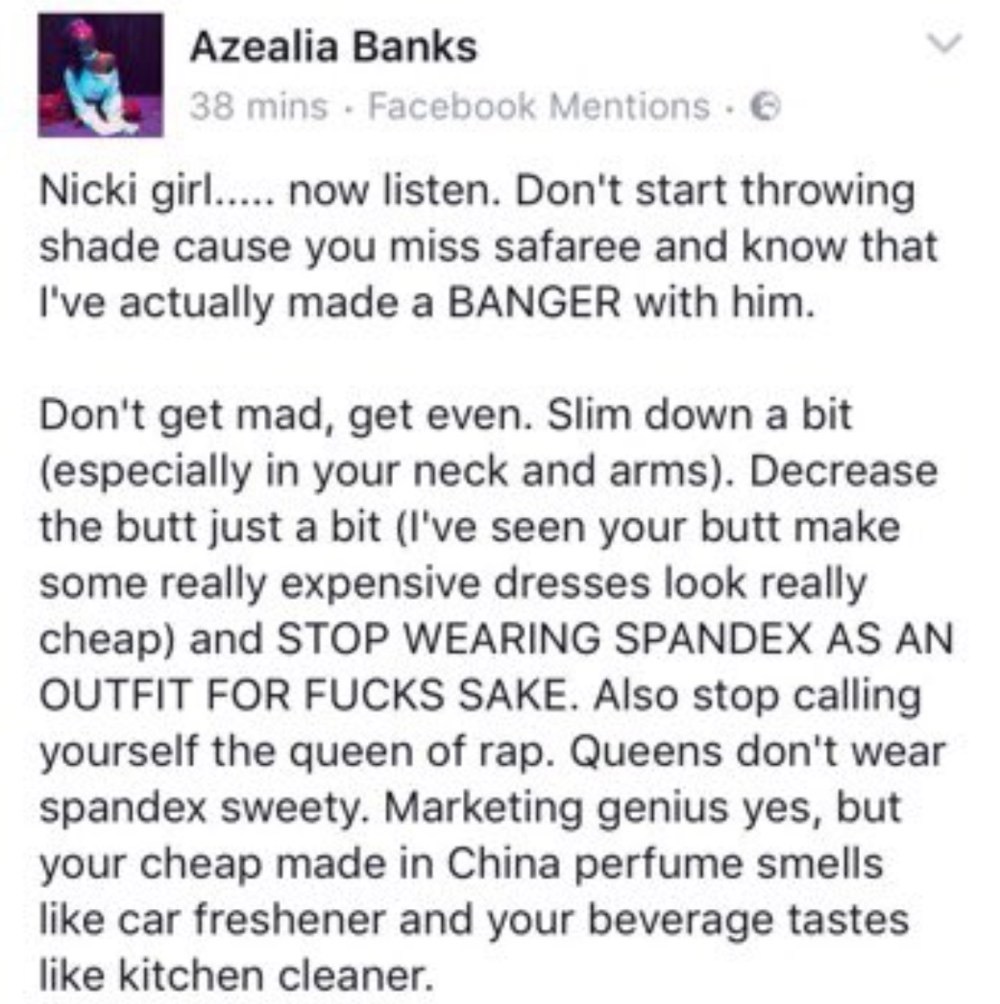 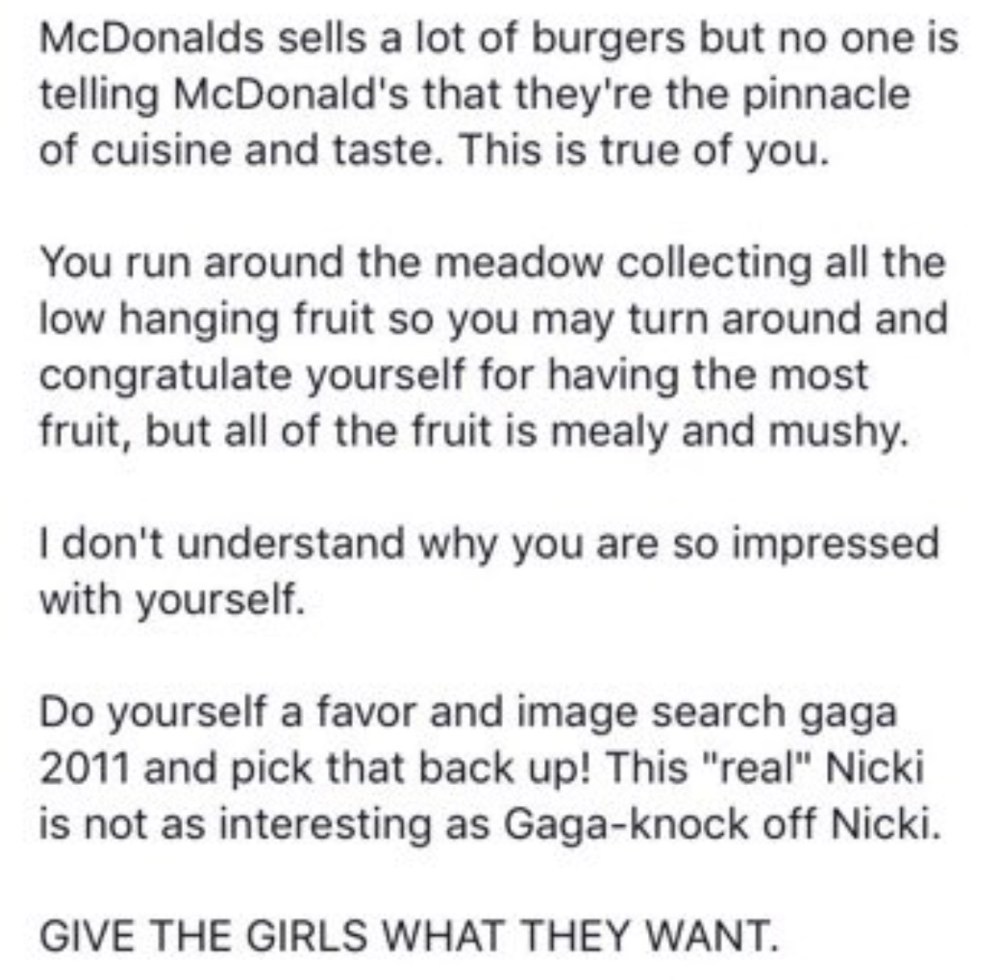 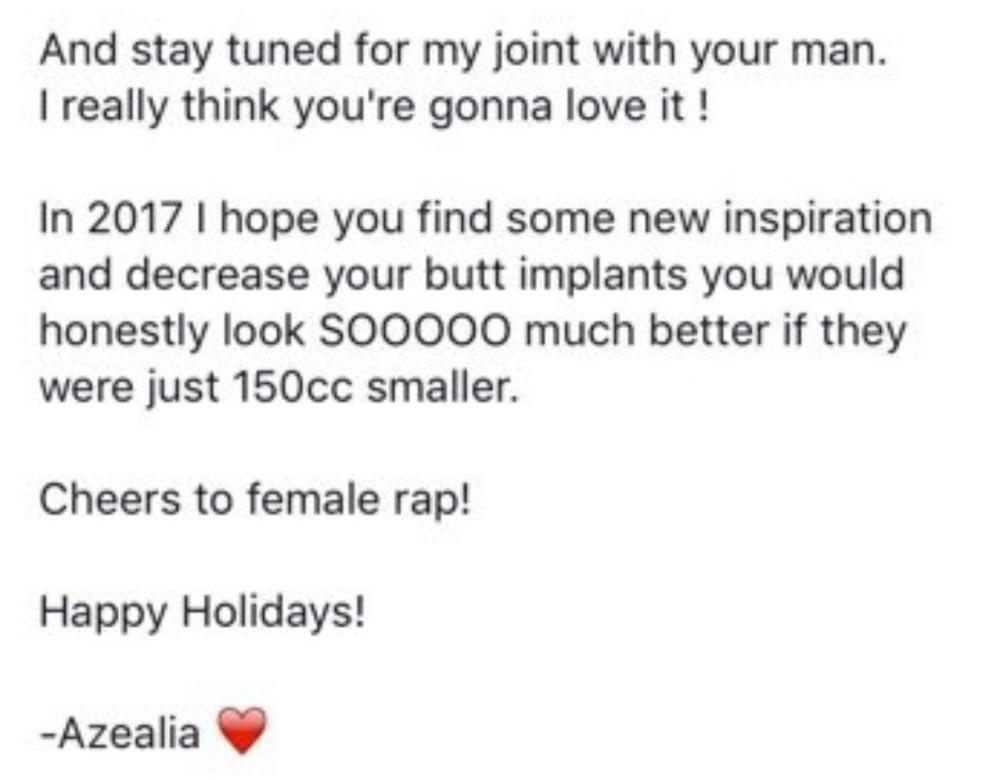 Will Ferrell says he got drunk and did a nude scene because Snoop Dogg was taking is good old time on set, smoking weed.

The Legendary Roots Crew To Be Honored With Their Own Street

600 East Passyunk between South Street and Bainbridge will now be known for more than eclectic shops.

Cardi Denies Beating Up Security Guard In A Medical Office

Cardi B. is accused of beating up a security guard when she was pregnant with baby Kulture.

Iggy Azalea is taking a break from the music business, to rethink her career.