"I’m not transphobic. Ya love dragging that."

(AllHipHop News) Cardi B felt a certain way this morning about getting attacked on social media, and she let her feelings be known. The 26-year-old Bronx-raised rapper took to Twitter to respond, in a series of now-deleted tweets, to trolls claiming she is prejudice against transgender people.

"I’m not transphobic. Ya love dragging that. Have I said some remarks in the past that I apologized for [?] YES, I’m from a place that people have closed mindsets so we might not [know what] insults other or not. I never disrespected no trans nor nobody from LGBT," tweeted Cardi.

Plus, she wrote, "How many tweets and videos have I made supporting LGBT? PLENTY! How much I support 2 on my glam team who I been experiencing they Transition? HARD! So don’t label me something that I’m not!"

The Grammy winner also added, "DO you know the real definition of Transphobia? You can’t even be next to trans or gays people literally fight for them not to have equal rights as. [I'm] in [an] industry that until this day male rap artists get uncomfortable when I come thru wit my team and I still don’t GIVE A F*CK!" 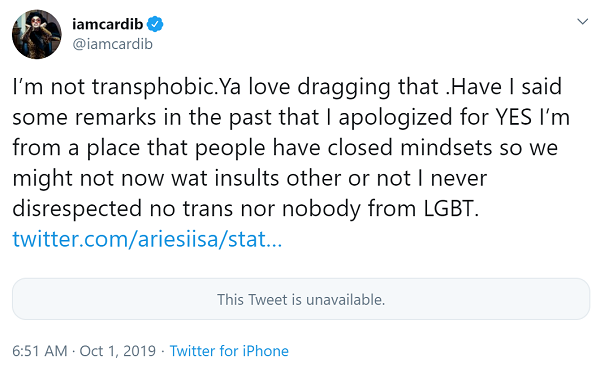 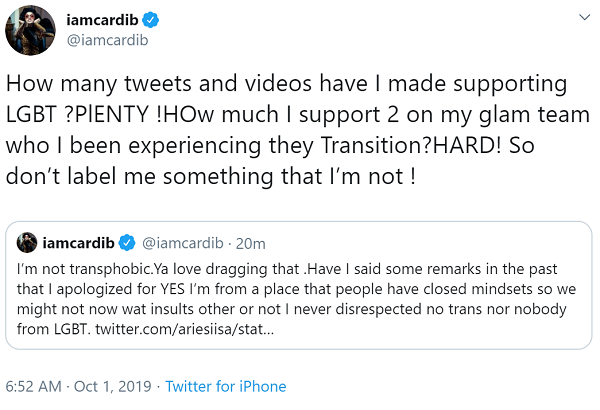 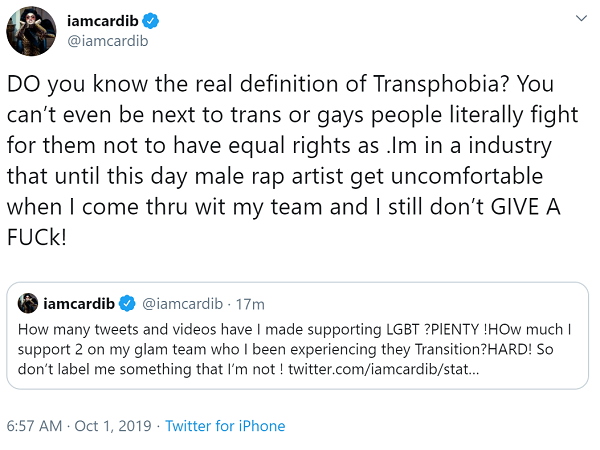 "B*tch my sister is gay! My best friends are gay butch women. I’m a whole bisexual so wtf are you talking 😒," replied Cardi to a Twitter user named @FentyMinaj1 who claimed the rap star needed "the gays" to improve her fashion.

Last year, a transphobic meme was posted to Cardi B’s official Facebook. The "Bodak Yellow" hitmaker insisted a former associate ran the account at the time and she did not have access to the page.

Pose actress and transgender activist Angelica Ross called out Cardi for the image which used the slur "tr*nny." Ross later showed appreciation to Cardi for "addressing the issue and taking responsibility like a boss."

T.I. & 50 Cent Accuse Each Other Of Being A Snitch

Tip is still calling out the "bully" to accept a hits-for-hits faceoff.

Five suspects - including two kids - have been arrested for killing Pop Smoke.

Kid Cudi's Daughter Announces Her Dad Has A Collaboration With Eminem

The last week has seen Ye express a lot of his eccentric views about politics and more.

Naya Rivera is presumed dead after her 4-year old son was found on a boat alone.

Plus, the company announces a donation to help COVID-19 efforts.

The "Ego Death" performer selects tracks by Hov, Jay E, Solange, The Weeknd, and more for his "At Home With" Apple Music playlist.