Jay-Z's former business partner Damon Dash is being accused of assaulting another woman almost 20 years ago.

(AllHipHop News) Another woman claims Damon Dash attempted to sexually assault and rape her during an incident that took place almost two decades ago.

A woman only identified as T. Harper, sent a notarized letter to court, claiming she met Damon Dash at a restaurant in New York one night when she was a college student.

T. Harper said she was with a group of friends who ran across Damon and his entourage, and soon they were all hitting off together.

Damon allegedly invited them back to a penthouse in Palisades, New Jersey, and everyone was partying and having a good time.

According to Harper, a friend called her back to the master bedroom of the penthouse, where she claims she encountered Damon wearing nothing but a towel.

"As he got closer, he took his towel off and began to play with his penis. I told him I was not interested in having sex. The friend who called me back, was nowhere to be found," according to T. Harper.

That's when Harper claims Damon attacked her, threw her on the bed and aggressively tried to force her pants down.

Harper maintains Damon tried to penetrate her with his penis, but he was unsuccessful because she clenched her vagina, tightened her legs and "continued to fight."

T. Harper claims Damon did stick his fingers in her vagina during the alleged encounter, which ended when Harper kicked him in his groin and fled the bedroom. 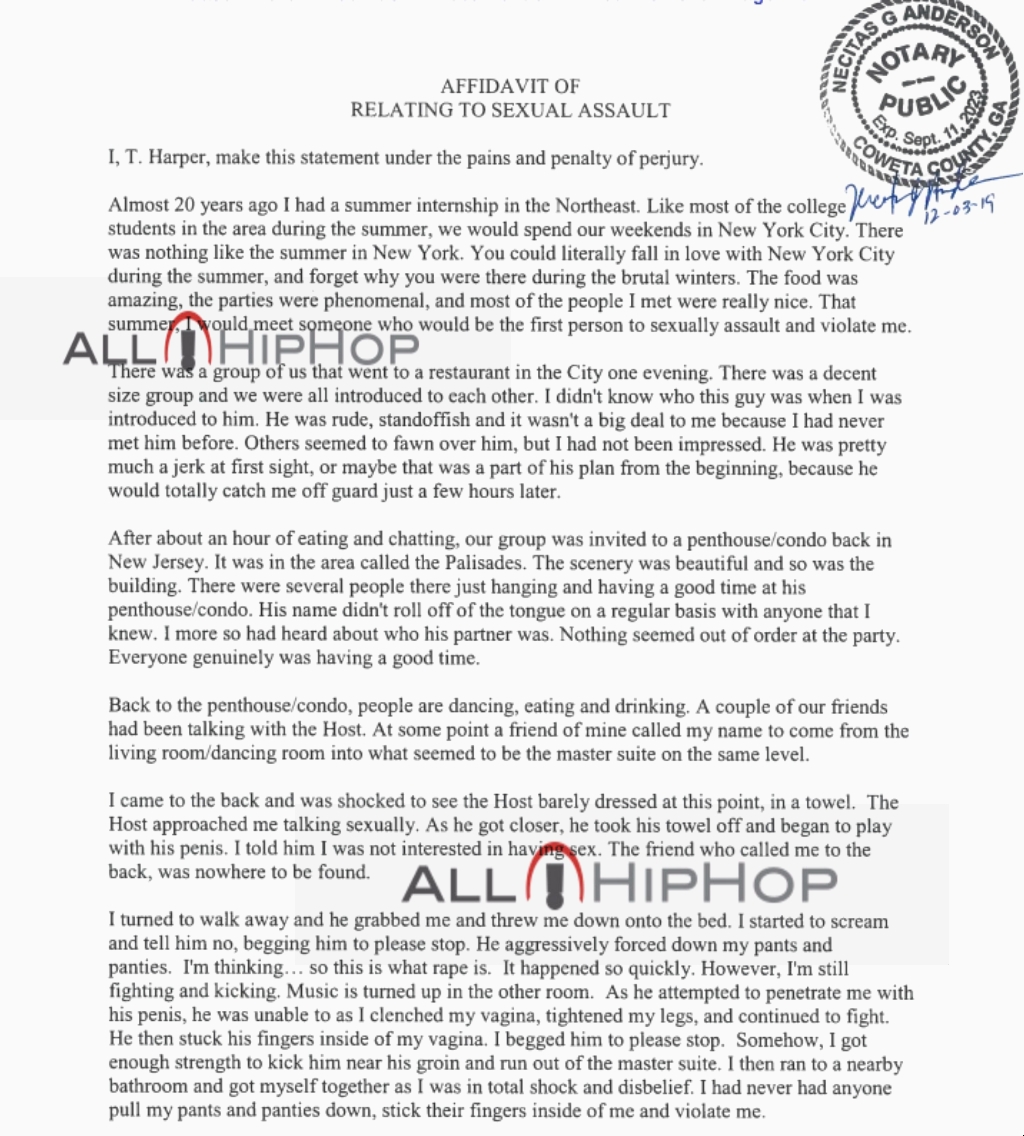 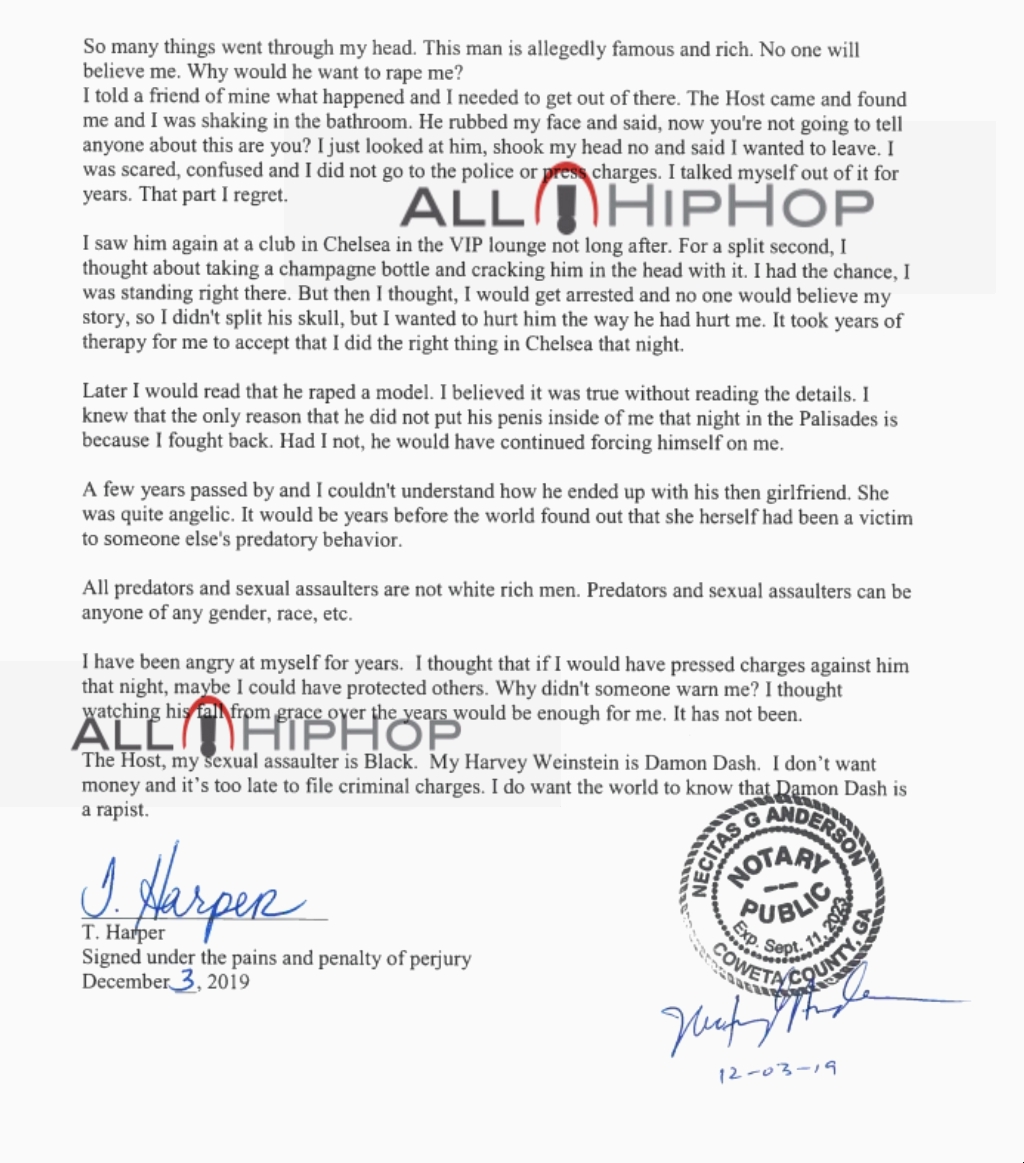 She also considered retaliating against Damon Dash when she saw him clubbing in Manhattan one evening several months after the alleged attack.

"For a split second, I thought about taking a champagne bottle and cracking him in the head with it. I had the chance, I was standing right there," T. Harper said. "But then I thought, I would get arrested and no one would believe my story, so I didn't split his skull, but I wanted to hurt him the way he had hurt me. It took years of therapy for me to accept that I did the right thing..."

T. Harper lumped Damon Dash into the same category is R. Kelly, since they both dated late singer Aaliyah. She also Damon to his former business associate Harvey Weinstein.

"My Harvey Weinstein is Damon Dash. I don't want money, it's too late to file criminal charges. I do want the world to know Damon Dash is a rapist," T. Harper wrote in her letter, which was submitted to the court under the penalty of purgery.

The second sexual assault allegation is contained in a $50 million lawsuit filed by a photographer Monique Bunn.

Bunn claims she was hired by Damon to work on a photoshoot for his Poppington brand.

She claims she spent the night at Dash's house after work when he walked into her room in a bathrobe with no underwear and groped her breasts and buttocks.

In addition to the sex assault claim, Monique Bunn claims Damon hijacked a thumb drive with 20-years worth of work on it.

To add insult to injury, Damon has allegedly been using rare images taken from Bunn's thumb drive and posting them on Instagram to hype up his own projects.

Damon asserts he is being extorted by Monique Bunn's lawyer Christopher Brown in a new Instagram post addressing the sexual assault allegations levied at him by Monique Bunn.

"First they come into your house then they try to rob you...when they get caught then they they try to make a good guy look like a bad guy ..then try to extort you..," Damon snapped.

The rape sympathizers make me itch. Dudes can get sex all day long and still sexually assault or rape. Just like people can have all of the money in the world and still be kleptos.

Remember these guys, they are handsome too. And convicted rapists. They didn't look like they needed to or had to, but it seems as if they did. Sexual assault and rape are not about looks, but about power and control. I will be eating my popcorn waiting for this to unfold.

Hopefully, if any girls or women, or boys or men in your life are ever assaulted, you will stan for them as hard as you do for this dude.

I think many women would consider these two attractive, wealthy men, who did not have to take anyone, but they did.

so this big VERY unattractive chick who was trying to steal from him, and now a chick from 20 years ago wants to claim sexual assault? yeah this seems legit...smh.

Looking at the lifestyle in the Hip Hop industry, niggaz get pussy every 30 seconds. Sometimes 1 or 2 of these groupies will act funny. She was in college and needed extra money so her friends suggested hitting spots that have celebs frequenting. The second time she met him in the club again and if she was close to him she must have been in the high rollers section coz i doubt Dame would have been in a lame club during his hay days. She a groupie and looking for quick buck. TV show interviews and a book deal most likely.

Still dont understand what people actually get by tarnishing other peoples image. This story doesnt seem true to me. I just hope that the truth prevail at the end of the day.

Hidden Hands all over this . Dame you know warfare kill the public perception of you. they stay tryna pull you down. And allhiphop.com you control narrative and direction of your content I know its business but overall you still have to know your place in driving hip hop what do y'all stand for overall .

These bitches is tryin to get cake from Dame. I seriously doubt he tried to fuck the fat one and i find it interesting that 20 years later is when the other feels violated. GTFOH!!!!

The Lox Lineup Superproducers For New Album "Living Off Xperience"

The Lox will be dropping a brand new album this month and fans cannot wait.