(AllHipHop News) An authentic announcement or a publicity stunt? That is the question many political junkies and Hip Hop heads have been asking ever since Kanye West announced he was supposedly throwing his hat in the race for the White House this year.

"We must now realize the promise of America by trusting God, unifying our vision and building our future. I am running for president of the United States! #2020VISION," tweeted the G.O.O.D Music label founder on July 4.

It is not clear if West has actually filled out the required paperwork to have his name placed on the ballot for the November 3 election alongside President Donald Trump (R) and former Vice President Joe Biden (D). However, that has not stopped some high-profile people from publicly backing the entertainer's candidacy.

Technology entrepreneur Elon Musk quickly commented under West's tweet, "You have my full support!" Even Dallas Mavericks co-owner and Shark Tank reality show star Mark Cuban suggested he would pick West over Trump if there were rank choice voting options.

In addition, West got a co-sign from his longtime musical collaborator and G.O.O.D. Music affiliate 2 Chainz. The Atlanta-raised rhymer took to Instagram to post Ye's tweet with a caption that read, "Shiiit I hated I voted early real talk."

Apparently, 2 Chainz was not aware that the primary election is not the same as the general election in November. No votes for the national general election have been cast yet, as one person pointed out to him on Instagram.

Other IG users did not agree with the 42-year-old rap star suggesting he would like to see West campaign to be the 46th President of the United States. 2 Chainz's Instagram comment section was filled with people strongly pushing back on the idea of Kanye West actually becoming the Commander In Chief of the U.S. armed forces.

Some detractors claimed a West candidacy was just an attempt to split the Black vote so that Trump - who Kanye had vehemently embraced for years - could have a better chance of defeating Biden. Others called the political novice a "clown" or referred to his presidential announcement as "bullsh*t." One person simply put, "We're f*cked."

West has not officially offered a single policy proposal or laid out a vision for dealing with issues such as the COVID-19 pandemic, the economic recession, systemic racism, police reform, healthcare, immigration, infrastructure, gun reform, voting rights, climate change, abortion, education, or defense spending. As of press time, West's most recent tweet featured a picture of what he called "YZY SHLTRS" being built. 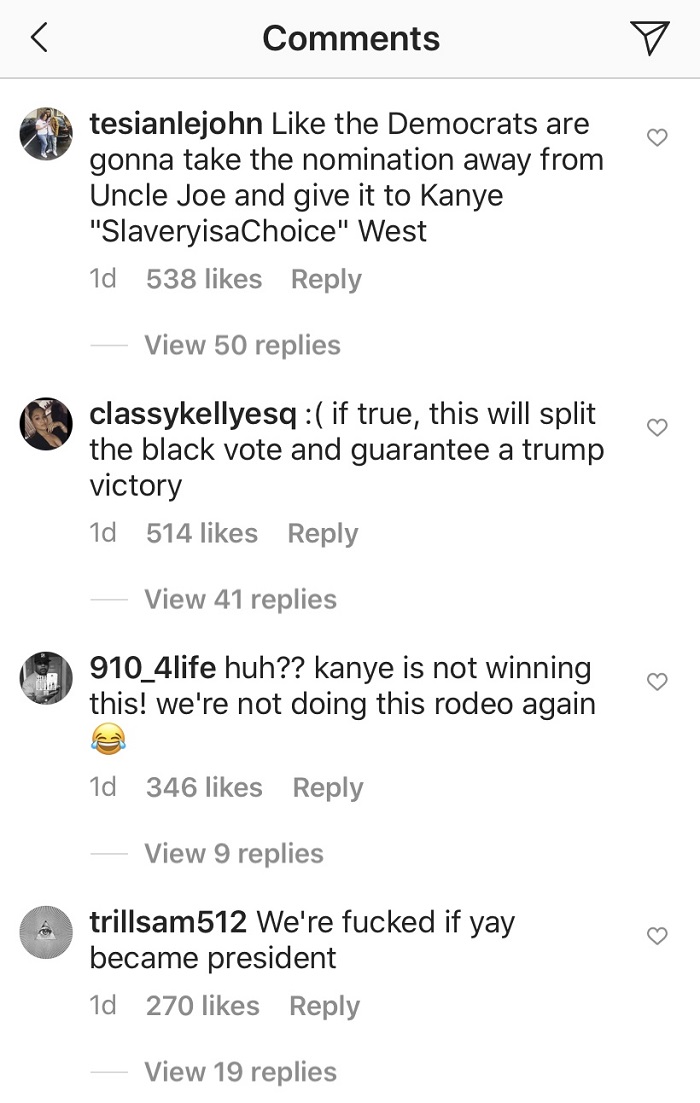 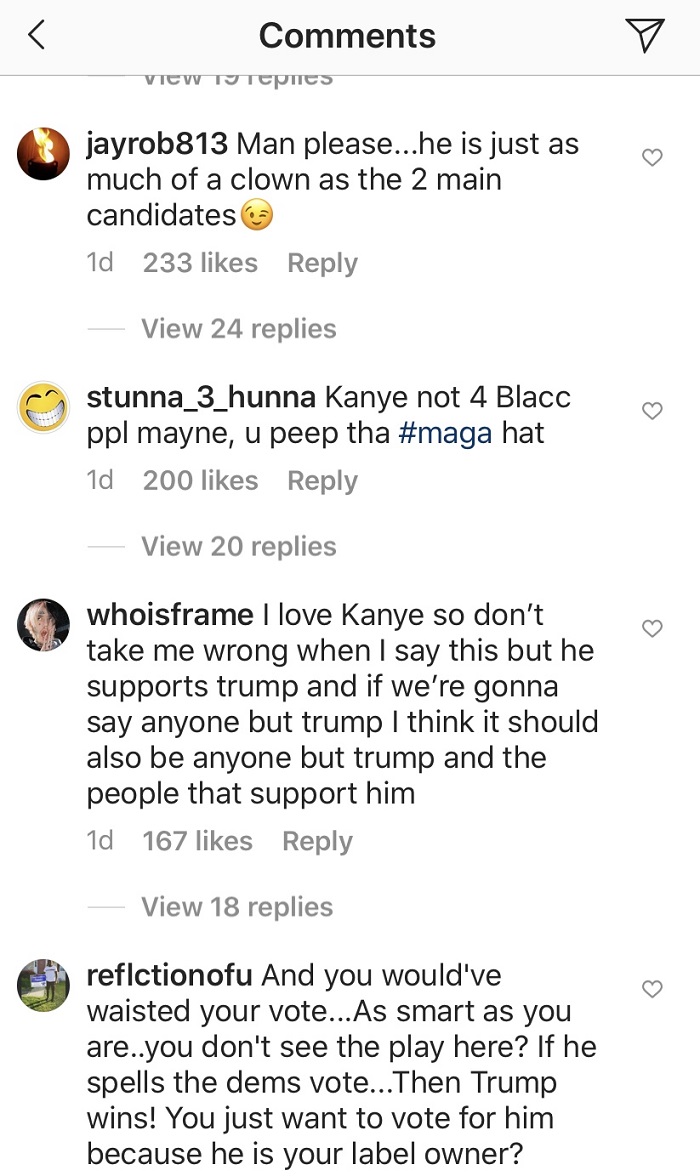 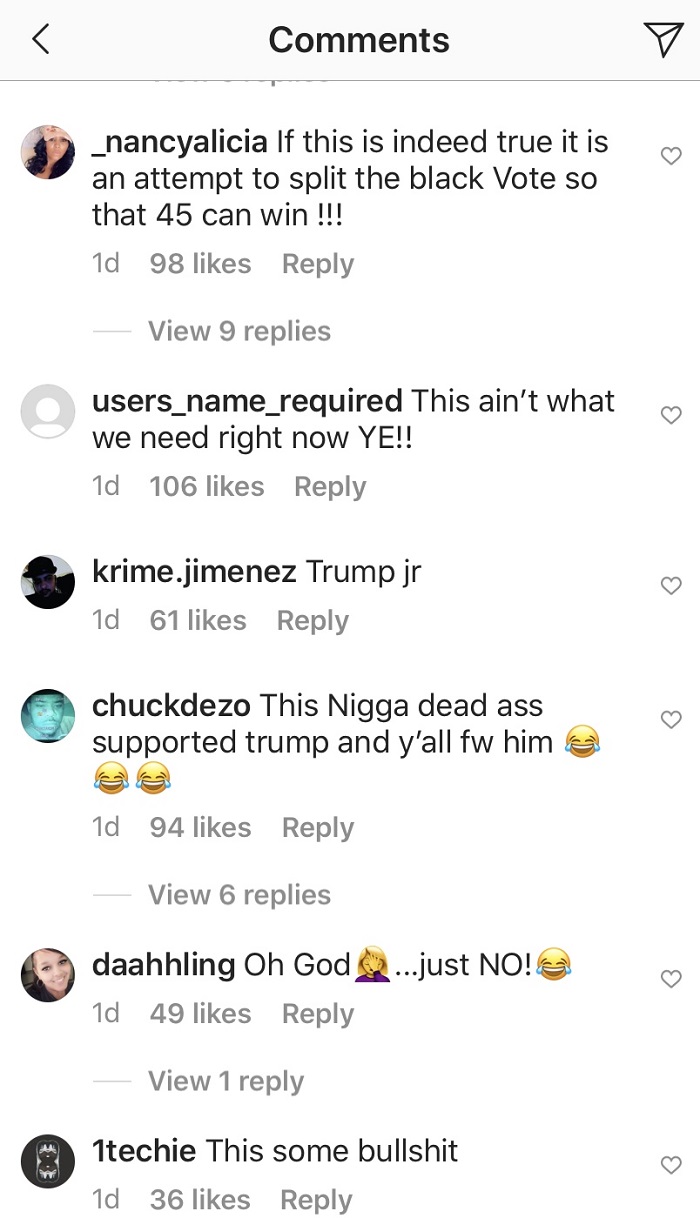 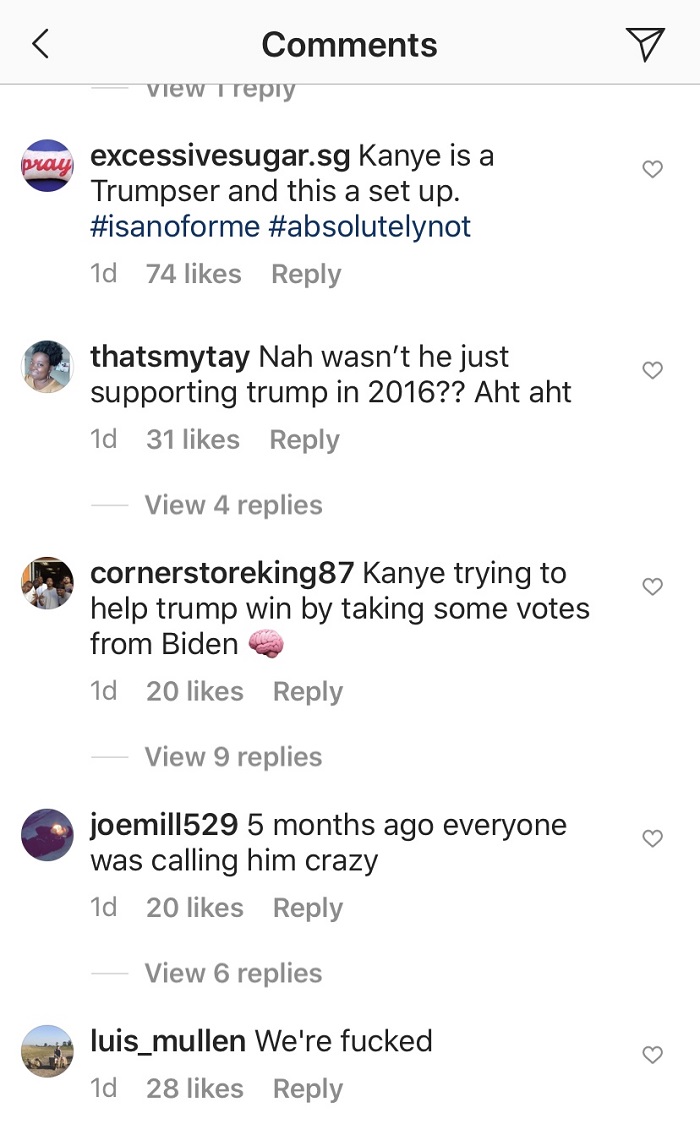 Would you like to see JT and Usher go head-to-head in a 'Verzuz' matchup?

The star-studded event is being presented in association with Rock The Bells.

The rapper/podcaster reacts to being canceled on the app by accusing Maya Moody of being a hypocrite.

The partnership with InnoPsych and NAMI will provide resources for Black youth.

A Hope Scholarship program will provide debt-free education for 25% of enrolled students.