By: Wynne Alexander
Political Director, CollegeHipHop.com
Wynne Alexander is an investigative journalist who has interviewed national and international artists, icons, sports stars, business and political leaders including Muhammad Ali and Coretta Scott King. She is also the author of the pioneering civil rights book, Get It From the Drums.

So let me get this straight – in 2013, with a hostile congress and facing possible impeachment if he goes unilateral with an airstrike against Syria for using chemical weapons on its own people, President Obama, in keeping with a proper reading of the law, asked for congressional consent for an airstrike into Syria.

The Republican congressional leadership said, “No.”

Then-Citizen Trump, repeatedly told Obama to “stay the hell out of Syria” but now Don Trump and Republican congressional members are applauding the same airstrike and claiming victory at being ‘better than Obama?’ When in fact y’all blew 59 tomahawk missiles, price tag: at least $70 million and you did not hit the actual air strips, did not disable the airport and did not hit the chemicals. Plus you gave Putin an hour’s notice to move his boys, for good measure. The Syrian target, so-called, had planes back up and flying in 36 hours.

Don Trump giving Batman’s Two-Face a run for his money. 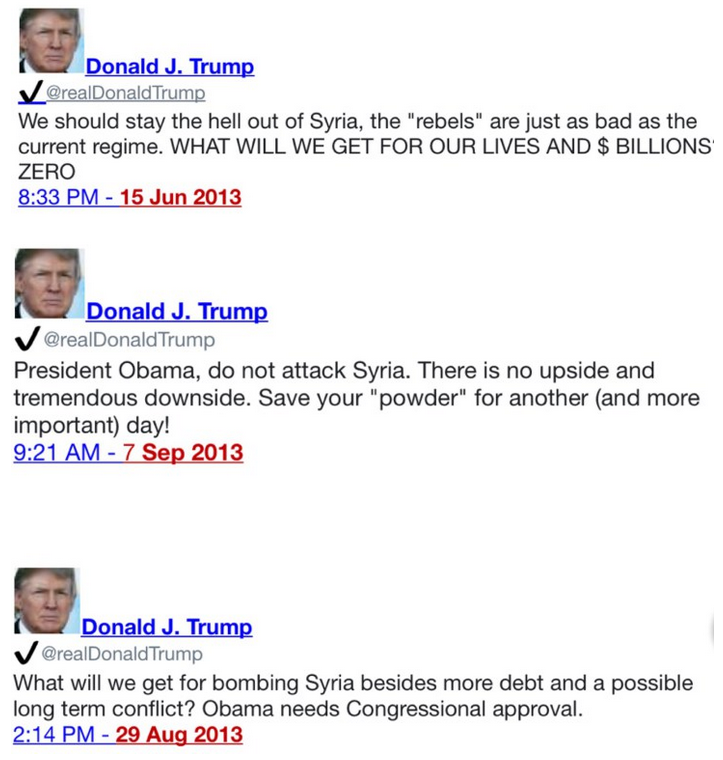 And you should have had congressional approval yourself, Don Trump. And a genuine Syria Policy too.

Don Trump – this ‘fixed’ show-bombing will NOT FIX your demonstrated affection for Russia and the paper trails left by you, Flynn, Manafort, Kushner and Bannon. By the way Don Trump – nice killing on that house you oversold to the Russians – what was your mark-up percentage on the Palm Beach mansion that went for $95 million?
You guys are so slick.
Y’all get a whole 3 hours before we all know what you’re up to. Congrats!

But Wait there’s more of the continuing madness that has befallen 1600 Pennsylvania Avenue. Here are just some of the worst mistakes:

— National Security Adviser Michael Flynn forced out of office after only 24 days.

— ‘Repeal and Replace ObamaCare’ went down in flames as the Negotiator-in-Chief fails then quits like a spoiled millionaire.

— Trump immigration bans have themselves been banned by the Courts and found to be racially biased and Trump’s repeated anti-Muslim speeches were cited as proof of his anti-Muslim bias.

— Congressman Devin
Nunes (R-Calif.) had to recuse himself from leadership of the House Intelligence Committee probe into Trump’s affairs. Nunes’ insane behavior at the obvious behest of his boss, Don Trump, was just too bat-____ crazy. Nunes was supposed to represent the People of the United States in that Congressional investigation into Trump administration connections with Russia. Nunes blew it like a rank amateur. He blew it so bad, fellow Republican Senator John McCain told NBC, “I have not seen anything like it and it’s disturbing.” 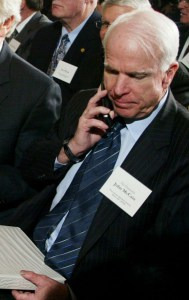 Trump is apparently blind to the fact he is producing a whole new TV show of his moronic apprenticeship in the White House, soon to be renamed the ‘What House.’ How much televised proof does Trump have to create before he stops showing us he is the Most Ignorant Man in the history of the U-S presidency. I never thought anyone would beat George Dumya Bush for that title but here we are. And I guess we have Putin and Carl Rove to thank for it. Rove discovered you can train apes to perform in the White House and Putin bought an orangutan.

committed a crime without citing one shred of evidence regarding her reported unmasking the identities of Trump associates under surveillance, including the disgraced Russian and Turkish foreign agent, Michael Flynn. Like the inane Obama accusation, Trump is so ignorant of how our government works, he accuses people of things that government structures and protections do not allow. There’s a paper trail on it. And as if the attempted smackdown of Susan Rice wasn’t bad enough for his image.

— Don Trump then backs Bill O’Reilly in his nationally-outed, serial violation of women.

$13 million dollars and counting, in pay-outs for O’Reilly’s serial sex-based crimes against women and Don Trump says O’Reilly “didn’t do anything wrong,” spewing smack downs for women again. At least Mercedes Benz, [a brand named for and built by women] BMW and over 50 other sponsors know better. They pulled their ads Don Trump – they left.

— Don Trump’s budget was ‘dead on arrival’ and that quote’s from Republican Senator Lindsey Graham – who, like McCain, continues to impress, with his ability to tell the truth about Trump, regardless of party affiliation: 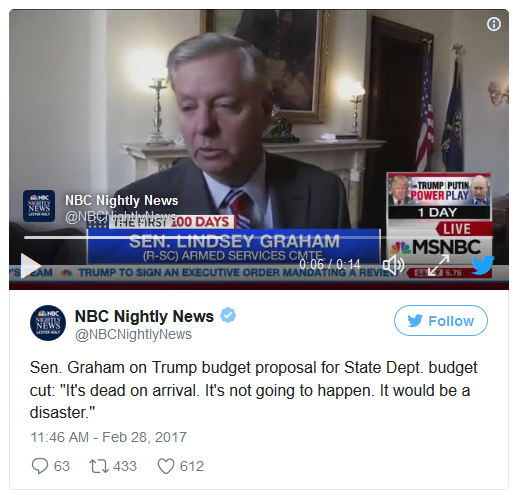 The budget was plain nasty – Trump even cut money to Meals on Wheels which feeds the sick and elderly.

Trump cuts funding to Meals on Wheels and others so he can give Billions to Billionaires, in tax breaks. When you hear them say, “The country doesn’t have the money for health care – Don’t you believe it. We’re so rich we give billions to billionaires and millionaires. That whole TrumpRyanCare bill was a massive tax-break enchilada for the top 2% and Medical/Insurance crew, wrapped in a flimsy healthcare tortilla.

— Comey’s FBI joins the United States Senate and the U-S House of Representatives for a total of at least 3 major Trump investigations.

— In the now infamous ‘Obama wire tapped me’ tweet, Trump lied about that, lied and implicated England to try and prove he didn’t lie about Obama, and further offended a genuine world leader and another staunch ally, Angela Merkel of Germany, when he wouldn’t shake her hand and lied about Germany owing the U-S money over NATO. The Germans are all paid up.
They owe nothing.
He lied again.
I guess the real historic headline is – ‘100 Days of Lies and Soaring Incompetence.’

To cite again, the timeless wit of Congressman Charlie Rangle, Trump and his administration’s band of vapid embarrassments certainly ‘shatter the myth of white supremacy once and for all.’