(AllHipHop News) Model-turned-TV personality Chrissy Teigen has issued a new plea to fans to stop sending her photos of babies who look like her singer husband John Legend.

Devotees have been sharing pictures of his little lookalikes on social media ever since one image of a tot went viral in 2015 for bearing a striking similarity to the “All of Me” hitmaker.

At the time, both John and Chrissy were amused by the astounding likeness, but by early 2016, the “Lip Sync Battle” beauty confessed she had tired of the memes as the couple prepared to welcome their own child.

“Please stop sending me this baby,” she wrote on Twitter. “I have had a year of this baby on my timeline. go away, baby.”

Another baby doppelganger surfaced last week, when a Twitter user with the handle @MrMenziN uploaded a shot of the youngster and jokingly suggested the kid was John’s.

That photo also went viral, as people began posting shots of other babies bearing uncanny resemblances to John, prompting the R&B star himself to respond to the renewed fascination with his looks.

“I think the reason all these babies look like John Legend might be that John Legend looks like a baby,” commented one person, to which the singer replied, “Exactly.”

Chrissy, who gave birth to their daughter Luna in April, 2016, weighed in on the topic and urged fans to get over the similarities.

“For the LAST TIME, JOHN looks like a baby so A LOT OF BABIES LOOK LIKE HIM,” she declared. “STOP SENDING ME JOHN BABIES”.

Some followers lamented with the 31-year-old, but others decided to use her request to troll her online, inundating her profile with more baby pictures just to annoy her. 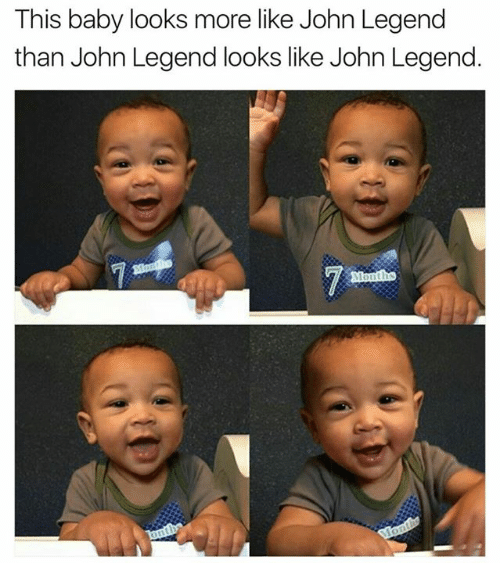