Following the release of several projects – including 2015’s Broad Shoulders – Taylor Bennett is back with a 9-track EP.

(AllHipHop Features) Following the release of several projects – including 2015’s Broad Shoulders – Taylor Bennett is back with a 9-track EP. Restoration Of An American Idol arrives after Bennett spent the last few years building his fan base by dropping music, performing at festivals, and annihilating freestyles on Sway In The Morning.

Many listeners discovered the native Chicagoan as Chance The Rapper’s little brother, but Taylor believes he has effectively emerged from the shadow of his Grammy-winning sibling. In a way, Restoration Of An American Idol is the personification of his celebratory mood for being a performer that believes he is currently creating at his own high level.

As an independent artist, Bennett has found ways to share his talent with the masses without major label help. The 21-year-old neophyte connected with the distribution/publishing company TuneCore, and he is also a “Tidal Rising” artist.

His association with the Jay Z-led streaming service could materialize into more entertainment opportunities, similar to what other Tidal-supported emerging acts like Lil Yachty, Dave East, Desiigner, Sir the Baptist, Levi Carter, and BZZY have experienced.

Outside of the music, Bennett also made headlines earlier this year when the rapper-singerrevealed he was bisexual. Taylor received support from many of his peers and fans. Chance eventweeted, “He’s got God and me behind him, he cannot fail he cannot fall,” not long after his brother’s announcement on social media.

During an interview with AllHipHop.com, the “New York Nights” rhymer expressed he was not ready to publicly discuss his decision about coming out. However, Taylor did give insight into his latest body of work as well as his effort to assist homeless youth in his hometown through the Sleep In initiative.

Just from listening to your music and watching your interviews, you usually come off as having this upbeat, positive attitude. Where does having that constant positive outlook come from?

You have a big thing coming this week. Your new EP is dropping. Restoration Of An American Idol – that’s a pretty self-assured title. What’s the message that you’re trying to convey?

I think that as an artist you have to be willing to stand on your own two, be honest and say, “This is who I am. This is my place in the musical world, and I’m not afraid to claim my title of who I am.” I also like to think this is my breakout album.

You say you feel like this is your breakout album. There’s a line where you say, “I had to show I’m not lil bro.” Do you feel this is like your Janet Jackson’s Control, where you’re putting a stamp on, “I’m Taylor Bennett, my own respected creative force”?

Growing up, everybody thought I wanted to rap because I was Chance’s little brother. But after the Broad Shoulders album, the Broad Shoulders short film, selling out venues from New York to Chicago, the “10 Fingers of Death” [freestyle], and all these things – I think I had to go through all of that to really get fans, not just people that wanted to hear me because I’m Chance’s brother or have people think, “He raps because he’s Chance’s brother.”

That’s why I’m so happy about this album because I think it’s so good. People can actually, for the first time, listen to it with a clean slate. Just looking at a clean slate and saying, “This is Taylor Bennett. This is what he’s about. This is his project.” That’s also why I think this will be my breakout project.

You have a record with you, Chance, and Jeremih on the EP. Were you guys in the studio together when you recorded that track?

When I got sick in New York, I had a blood clot. I felt so sick. That was the only song I could really think of. I called him like, “Yo, you gotta let me have this song.” He let me have it. That’s how it came together. We’ve worked through it all together since then, but that’s where it came from.

You’re also doing some work in Chicago with the “Sleep In” project.

Yeah, we’re working with La Casa Norte which is a shelter in Chicago. Homeless youth is a really big problem. When people think about homelessness, they don’t think about kids. Usually, they think about adults.

But in fact, homelessness with kids is a huge epidemic, especially in Chicago. So I’ve been doing a lot of work to try to bring the city together and to make something happen. Like I said, there are not a lot of people that are aware of it.

The thing about being homeless doesn’t mean that you don’t have a place to stay one day or the next day. It means you don’t have a stable place to go. So you could be sleeping at your aunt’s house or your friend’s house. That’s still homeless. That could even resort to sleeping on trains.

Growing up in the inner-city, I had a lot of friends that never really had a stable place to live. So that’s an initiative we’re trying to put into action right now.

[ALSO READ: A Conversation With Bas On His Generation Taking A Stand, Donald Trump’s Travel Ban & Putting In His 10,000 Hours]

Taylor Bennett’s Restoration Of An American Idol is scheduled for release on February 24.

Bennett will be appearing at the Restoration Of An American Idol release party scheduled for February 24th at Chicago’s JBTV Studios.

The “Sleep In Chicago” charity event is scheduled for February 24 – February 25 at the Second Presbyterian Church. For more information visit sleepinchicago.org.

Check out the tracklist for Restoration Of An American Idol below. 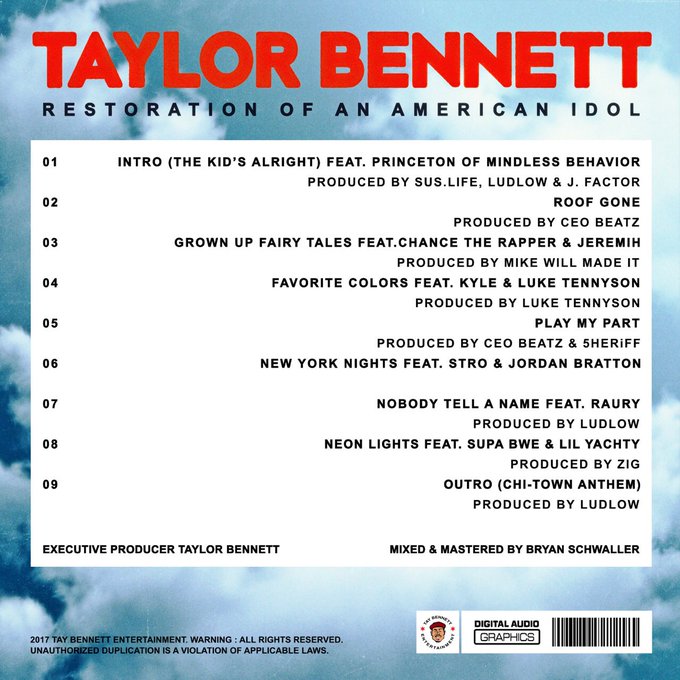 A part of the proceeds will benefit the REFORM Alliance.

Will the long-delayed project finally arrive next month?