Troy Ave Suggests Taxstone Is A Snitch & A Fraud

(AllHipHop News) According to Bossip, Taxstone’s lawyer is seeking to get his client out of jail on bail by questioning why Troy Ave was granted bail despite what he sees as having more serious charges.

Attorney Ken Montgomery also argued Troy Ave and his entourage were implicated in another club shooting days prior to the Irving Plaza incident.

The IG message included the self-described “NuPac” suggesting Tax is a rat and a fraud.

Besides the judicial troubles associated with this case, Troy was also shot during the melee backstage at the T.I. headlining concert on May 25, 2016.

Troy’s friend and bodyguard Ronald “Banga” McPhatter was killed, and other bystanders were injured during the gunfight as well. 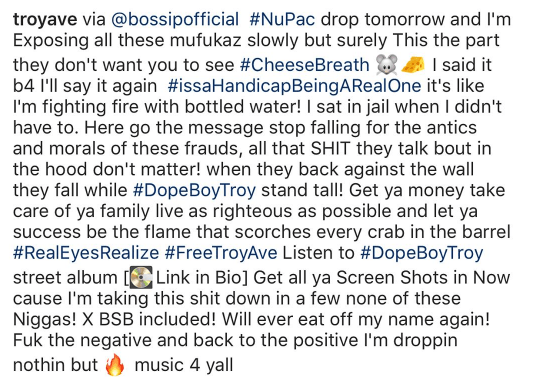 Kevin Hart Gets Aggressive With 50 Cent Over Gray Hair Jokes

Kevin Hart had some strong words for 50 Cent, who clowned the comedian gray hair.