While everyone has an opinion regarding Donald Trump, it seems that even more people have an opinion about Chrisette Michele.

While I’m not going to front as if I’m not a fan, because I am. Chrisette’s music was the soundtrack of my wedding, and “Epiphany” has found itself in heavy rotation on my iPhone. Regardless of all of those facts, I believe in going to the horse’s mouth and not the horse’s ass.

Many people took to Black Twitter and Instagram to roast Chrisette, including Spike Lee, who took to Instagram to insert himself into a conversation about Chrisette’s decision to perform at the Trump inauguration festivities.

So because Spike was “Thinking”about adding Chrisette’s song “Black Girl Magic” to his show’s soundtrack, he felt that his feelings would be best expressed via social media. Honestly, I’d expect that behavior from my teenage daughter, not from a 59 year old man. I don’t think it’s a good look.

On a personal note, I happened to be surfing the internet and I came across this picture from 2013 of Spike Lee and some very interesting people:

Spike Lee decided that he was going to come after me for pointing out his hypocrisy.

So because he decided to jump in my mentions, I decided to point out a few facts that my brother chose to ignore: 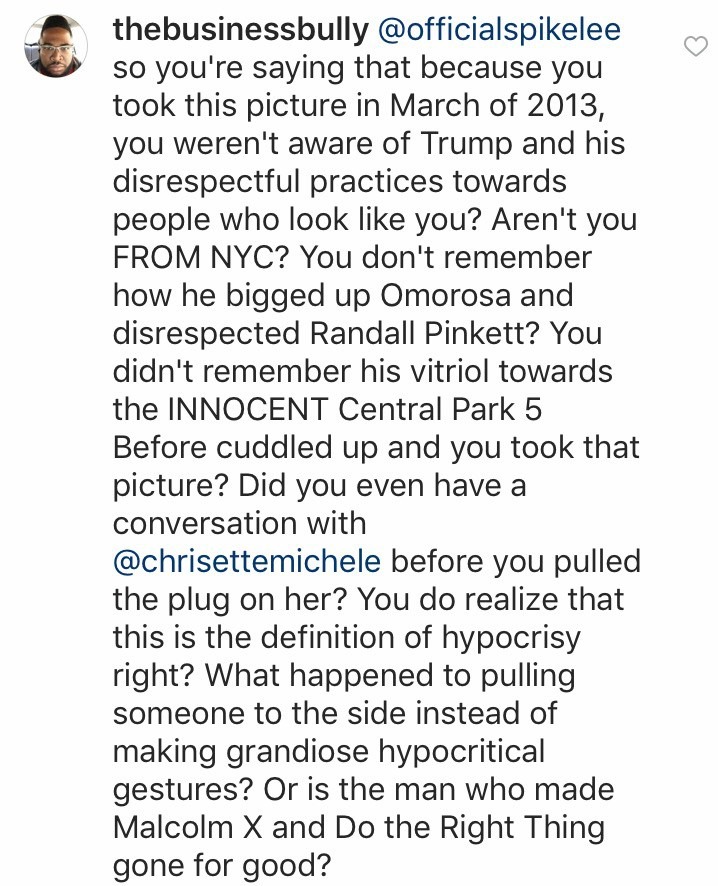 While folks decided to talk about how 2013 was before The Donald decided to run for POTUS, I decided to point out that Trump started the birther movement for attention back in 2011, still making Spike a hypocrite.

There’s a way to disagree without being disagreeable, and Spike decided to do the very thing that Trump does: Get on the internet and complain and drop attacks instead of having adult conversations.

So I reached out to Chrisette Michele for an interview. The interview is not about shock and awe, nor is it a witch hunt. All of the questions that were asked came from my Facebook and Twitter

The interview in its entirety can be heard on the Latest edition of The Business Bully Podcast. Also in this episode, I speak with the owner of one of the largest Black Lingerie Shops in the world, Kelly Thomas, about Black women being bullied by companies like Victoria’s Secret, amassing over 150,000 active users on social media, her expansion into sex toy sales and the challenges that curvy women face when incomes to finding intimate items that fit correctly!

Dave Anderson is a speaker, entrepreneur and #1 Best Selling author living in Philadelphia who loves sharing knowledge and helping others on the topic of entrepreneurship, branding and sales.

Dave is a passionate person who will go the extra mile and over-deliver. His aggressive, unorthodox and in-your-face style has earned him the nickname “The Business Bully.”

Having been featured in Ebony Magazine, The Breakfast Club, The Huffington Post and countless others, David has become the go to business expert and sales trainer for thousands of entrepreneurs who buy his books, watch him on YouTube or listen to his Podcast.

If you would like to learn more from Dave Anderson, please visit:

For bookings and inquires for lectures, book signings or speaking engagements email info@innerbrand.org

D-Nice showed what we already knew: Hip-Hop is is still rebel music, survival music and medicine wrapped in a message.