Quavo may have a bit of an issue with a young producer.

(AllHipHop Rumors) The Migos have shaken up the world. But there is a new controversy surrounding the southern Giants and it has nothing to do with Culture II. Quavo stands accused of stealing an instrumental from an up and coming producer. I am not sure how true this is as far as the stealing part is concerned, but the accusation is real. Clearly, the producer is a small fry in the game which makes it all the more easier to steal from him if it is actually true. However, for now it is just bubbling under the surface on rap message boards and a little bit on social media. The Migos seem to be to be too talented to steal but as you know these things happen just about every single day. At the end of the day, artists, producers, and other creative's are going to have to learn to protect their work before they send it in an unsolicited manner. 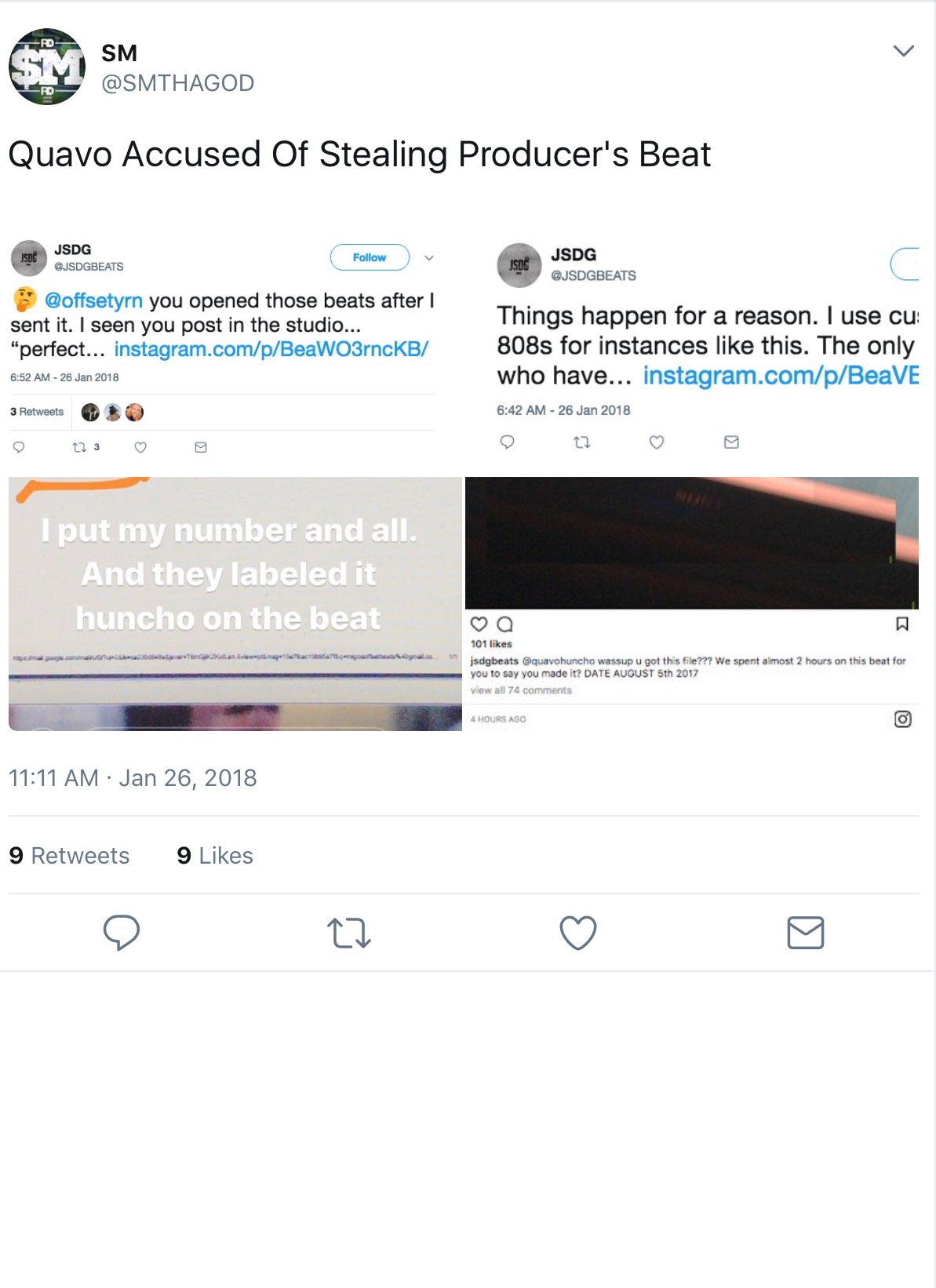 Hello everyone!!! welcome to Illuminati world of riches,are you a politician,business man/woman, a talented footballer, artist or a student and you wanna be rich and famous in life with good benefits within? Join Illuminati brotherhood and become extremely rich and famous in life and earn good benefits as a member. Illuminati gives wealth. BENEFIT AS A NEW MEMBER....(1). A sum of 45,000$ to start a new life and to meet up to the standard of living with other illuminati members (2). A new car worth 10,000$ (3). Free flight to travel any where as far as the illuminati membership card is with you. If interested for more info on how to become a member email: illuminatigoodnews666@gmail.com or Call/whatsapp this number +2348127030687

Instead of stealing from this up and coming producer, these dummies should be signing him to an exclusive production contract. If he made that one, he can make a million others like it. But once a nigga calls himself "Huncho" you know he's gonna try to go the Baby/Suge/Puff route and play somebody.

"The Migos seem to be to be too talented to steal" LMFAO What are smoking ?@AllHipHopStaff

Tekashi 6ix9ine Will Be Back Soon...Via Social Media.

The judge has just cleared the way for Tekashi to return to music and social media.

Who Tried To Ambush And Kill Young Chop?

The Chicago troller has been pushing the buttons of a lot of rappers lately, but the shooting is not officially linked to any of them.

Is This The Next Hip-Hop Biopic In The Works?

The Fugees might be the next big rap group to have their own movie!

So, Who Beat Up Nicki Minaj?

Nicki Minaj has claimed somebody beat on her, but who?