Look what Drake has found his name at the center of! The 6 God’s name is always getting drug into something, but who knew it would be over the use of the N-word by white people.

Reality-TV star @ArianeBellamar has been getting dragged to hell and back for her belief that her and other white people can use the word nigger and not be racist. It all started when she tweeted,

“Why is @VanJones68 always playing the house nigger?! He is smart. Able. Ready. Stand up! Don’t settle for this undefinable nonsense. #RESIST”

#OscarsSoWhite creator, @ReignOfApril informed her that while she may not agree with Van, she still doesn’t get to use this language.

Ariane maintained that she spends hours on hours volunteering for Black Lives Matters, so that proves that she’s not racist. April informed her that she could be married to a black man and still be racist, and she could raise awareness without the use of the N-word.

As if that wasn’t enough, the plot twist came when Ariane informed April that she uses the word nigger when she sings along to Chance The Rapper’s music and Drake’s music, as she claims that Drake is her close friend, and that he’s given her a pass to say it.

“@ReignOfApril Furthermore, Drake would whack me if I skipped it in front of him. He’s the musician. He’s not offended. That’s his choice,” tweeted Ariane.

April then suggested that Ariane is ignorant, racist, or both if she can’t understand why she shouldn’t use the word. What are your thoughts? Let me find out Drake’s black side if out here giving out passes to use the word. 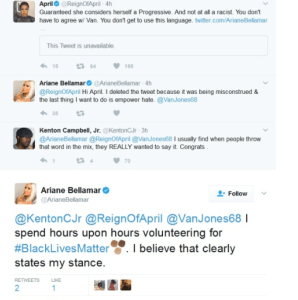 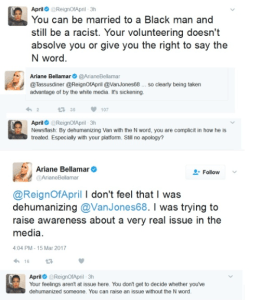 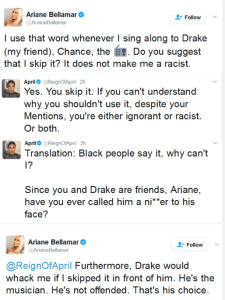 Tekashi 6ix9ine Will Be Back Soon...Via Social Media.

The judge has just cleared the way for Tekashi to return to music and social media.

Who Tried To Ambush And Kill Young Chop?

The Chicago troller has been pushing the buttons of a lot of rappers lately, but the shooting is not officially linked to any of them.

Is This The Next Hip-Hop Biopic In The Works?

The Fugees might be the next big rap group to have their own movie!

So, Who Beat Up Nicki Minaj?

Nicki Minaj has claimed somebody beat on her, but who?