Let me get this straight, Soulja Boy apologized to everyone, said he was squashing his beef with Chris Brown, prayed for his sick mother, only to go right back to his bull.

Well as we know, neither Chris Brown or Soulja Boy are wrapped too tight, so Big Soulja is going to make gangster Chris Breezy with the dance moves snap.

Earlier this week Soulja Boy already took it pretty far by saying that Chris Brown is a crackhead that does drugs around his daughter. Chris Brown may not GAF about anything else, but he doesn’t play about his daughter Royalty.

As you know, Chris Brown’s accident-of-a-baby mama, Nia Guzman, can’t stand Chris Brown, so Soulja Boy made it clear that he wanted to get under Chris’ skin by claiming he chilled with both Nia and Chris’ daughter last night.

Big Gucci Soulja also posted a photo of Royalty with Floyd Mayweather and TheMoneyTeam tags on it, seeming to suggest that little Royalty was ready to see her father get that azz beat!

Well it looks like Floyd Mayweather has been smashing Nia, because I can’t really imagine any other reason he’d have her around other than to add to the e-feud and publicity stunt.

According to TMZ, Nia told them that the Royalty pic had nothing to do with Chris. She says she’s just been hanging with Floyd a lot lately, and Floyd is allegedly investing in Royalty’s future.

If you are going to exploit your child girl, put some of Floyd’s money away for a rainy day. SMDH! 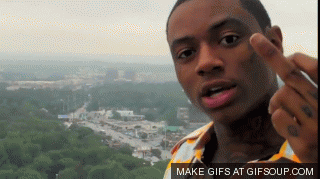