(AllHipHop Rumors) As much as they like black men, you would think that the Kardashians/Jenners would have some good black friends that would stop the foolishness that they are often on.

Well two members of the world’s “favorite” family are under fire for superimposing their faces over images of the late, great rap icons, Tupac and Biggie!

have lost their minds! It’s like they had to know better! One of them already got roasted earlier this year for claiming that Tupac was her spirit animal.

It seems like they got away with their Pink Floyd, The Doors, Metallica and Kiss t-shirts, but black Twitter and Hip Hop Twitter weren’t letting the Tupac & Biggie ones slide.

On one shirt, Tupac’s face is obscured by an Instagram screenshot of Kylie posing in a pool, another features Kendall’s portrait over an image of Biggie. To make matters worse, the shirts retail for $125.

They not only had fans and the culture f’d up, they had Biggie’s mom Voletta Wallace messed up as well!

“I am not sure who told @kyliejenner and @kendalljenner that they had the right to do this. The disrespect of these girls to not even reach out to me or anyone connected to the estate baffles me. I have no idea why they feel they can exploit the deaths of 2pac and my Son Christopher to sell a t-shirt. This is disrespectful , disgusting, and exploitation at its worst!!!,” said Wallace.

Biggie’s daughter, Tyanna, on the other hand is fine with it as she stated that people make Biggie t-shirts everyday. What are your thoughts? 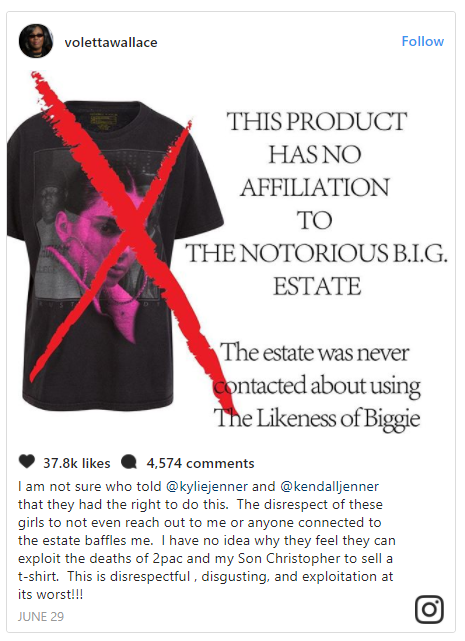