Was Fat Joe Taking A Shot At Chance The Rapper Over Grammy Loss?

The fact that the “c” in Chance was capitalized in Joe’s post got my attention too. LOL.

(AllHipHop Rumors) Sooooooo the internetz seem to feel that Fat Joe was taking a shot at Chance The Rapper after losing best Rap Song to the Chicago rapper at the 2017 Grammy Awards.

Mr. “All The Way Up” hopped on Instagram to seemingly throw shade at Hip Hop’s biggest winner of the evening.

The Bronx native was excited about the nomination, but to some came off as a sore loser soon after.

“I hear you gotta sell it to snatch the Grammy! Whats the Chance of that lol congrats to the winners! Theres always next year Plata O Plomo season. This Friday!!! #plataoplomo”

Anyway fans let him know that hating doesn’t look good on him in the comments. Do you think Fat Joe was hating on Chance, or was he just cracking a joke in good fun? Do you think Chance should’ve won over Joe?

What I do know is that, Hip Hop & R&B artists need to support each other period, and they need to not make a big deal about getting sh-tted on by the Grammys, when they won’t even show up to award shows like the BET Awards and the NAACP Image Awards to collect their awards. Ahhhh carry on! 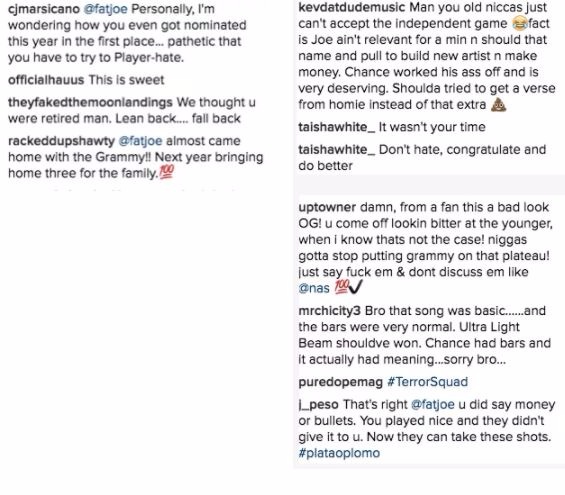