Anthony Mackie And Damson Idris start in an action thriller that challenges the notion of drone strikes and robot soldiers.

Anthony Mackie (“Captain America: The Winter Soldier,” “Hurt Locker,” and “8-Mile’) and Damson Idris (“Snowfall,” “The Twilight Zone,” and “Black Mirror’) star in a new movie “Outside of the Wire,” which is a futuristic take on the military and its role in what becomes a highly volatile, Dystopian future where Russia and the United States are on the verge of war. When you first look at this movie, you’re going to think perhaps there is a new superhero emerging. Or, Anthony Mackie is preparing for his future role as Captain America in the Marvel universe. “Outside of the Wire” may have “Winter Solider” vibes at first glance, but it is not that at all.

However, as the plot continues it is apparent that Leo (Anthony Mackie) is a super solider of a different sort, one that has taken Harp, a rebellious drone-manning soldier, under his wing. This standalone movie by Netflix envisions a future where cyborg & robots are as much a part of the military in America and Russia as human beings. But, the premise suggests, through Leo’s clandestine motivations, that this is a wrong route for humankind to take and that there must be a concerted effort to halt this trajectory. It seems to have an underlying antiwar theme over all but, It does not slow down the action, nor prevent bullets from flying. 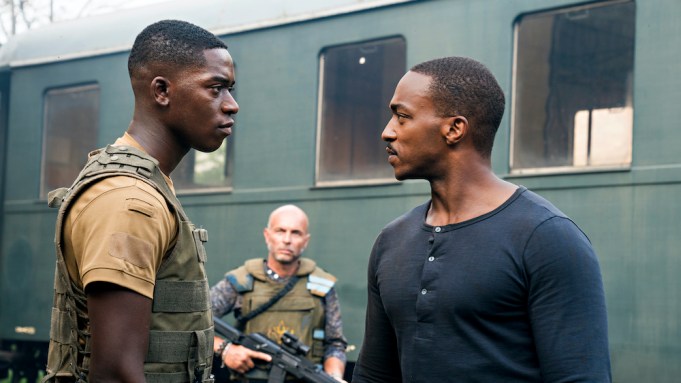 First of all, let’s just speak about the elephant in the room: there are two Black men leading an action / adventure / thriller in 2021. It does not need to be stated, but this is the sort of normalization necessary to have progress in Hollywood. Expect kids to be flipping off chairs and play fighting if they are permitted to watch this thrill ride.

Anthony Mackie, in an interview, described this movie as a passion project, but it feels more like a primary project that he has expanded his creative palette into a New World under Covid-19. So grab some popcorn, get the family together, and watch this movie full of action, subplots, and twists and turns.

“Outside of the Wire” drops on Netflix tomorrow (January 15), and it is delight to watch.