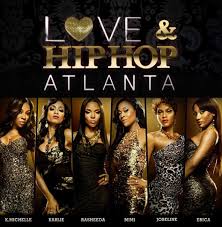 Last night a lot happened in New York and it was all caused by the cast from the show “Love & Hip-Hop Atlanta.” Mona Scott-Young and the reality show crew hosted a screening of the first show in front of a bunch of writers and bloggers. So here is a break down of what happened.

First of all, there was heavy security. All the cast members were well protected by at least one personal bodyguard. Joseline had a couple.

So, after the screening of the show, they did a Q&A and Joseine was missing from the stage. It seem that Stevie J upset her and she left. But, he simply complimented the mother of his child, Mimi. Guess people can’t say their baby momma looks good now.

As usual Stevie J was the star of the show. He was funny. He revealed he’s got a book deal in the works.

K. Mitchell revealed she is nearly finished her album but has one more joint to do with R. Kelly. She also revealed that she’s the first woman to get a Hookah endorsement deal! Black History! She also dissed the stuffing out of Bossip and one of the writers representing them at the event. She hated how they report on celebs, particularly when they are doing good.

Erica was just up there looking pretty. She said Scrappy couldn’t be there because he’s got a pending legal situation. Maybe it was that report on garnished wages but it seemed like something else.

Mimi was chilling too. She was going back and forth with Stevie J and dissing Joseline. She made it clear that she’s not a maid, but owns a cleaning company.

Mona Scott-Young was up there too. She revealed there’s a reality show with Bravo in the works, something we knew.

Ed Lover was in the house as well as Jeff Robinson, Alicia Keys former manager.

The crew from the Gossip Game were there too. Ms. Drama and Angela Yee were interviewing people on behalf of AllHipHop and Power 105. The rest of the crew seemed to be chill for the most part.