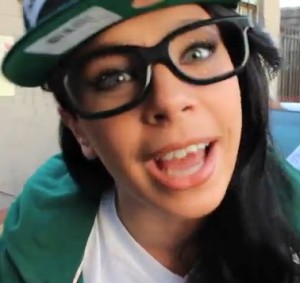 Oh SNAP! I never thought his would happened to these two chicks! They found solidarity in the color of their skin as the White Girl Mob. But apparently that is no more! Seems like something happened between V-Nasty and KreyKrey! I’m going to go out on a limb and think that the affiliation with V got to be too much for Kreayshawn and she had to distance herself from the N-word slang chief. I know it was HOT for her. Secondly, I think that Kreayshawn flopped and there was no longer a reason to stand next to her, because she’s not “winning” anymore. Thoughts? Some of the tweets are below. By the way, Kreayshawn has not commented. She was talking about her abs were tight and Santa being a fan of hers.

Later V did a lot of RTing and whatever of people that fed into the BS. But, Kreayshawn had nothing to say other than she’s done her best to help people.