Last night, down in the DC area, 50 Cent participated in some Radio One bowling event. I’m not sure of all the details, but the man was seen wearing Gunplay’s MMG chain. What in the world is 50 thinking? This has to be bad for the game, because…ahhhhhh…. I know Ross is not feeling this kind of beef. Back when they were beefing, Ross didn’t fully engage with Fif head on. It was more slick talk and work ethic. Here is the video of 50 bowling and you can see the chain.

Oh and 50 Cent went in on French Montana after he said beef doesn’t work like when Fif did it in Complex magazine. 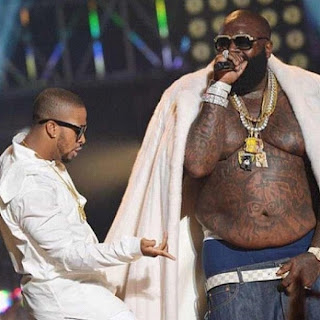 Why were more of the cyphers lame? There were some that were dope, but most were poo sandwiches.

Apparently, Diddy’s ex dropped the dime and said that Diddy is engaged to Cassie! Congrats! Cassie hung in there and got her guy.

I know Stevie Nicks and I know Fleetwood Mac. And, guess what? I don’t care! She said she would KILL Nicki Minaj over her talking back to her at the American Idol judging. Really? So, you all about to defend comments like this:

She said she would “strangle,” and “kill” Nicki in front of “all those people.” Nah. I’m not cool with that. I’m not even a big Nicki fan. And clearly you fools aren’t either since you want to condone the comments. Not once did I comment on anybody’s musical legacy or albums sold. WHO CARES. You bums with the comments must be KKK members in disguise trying to cause ruckus and then all the lil’ future TOMS follow from your tree house’s wifi with a “yeah you right man!” SHADDUP! If she said it about Talib or Mos Def (who have sold less than Nicki), you would be snuggled up in the JOCK STRAP in protest. Sydney Lace doesn’t write for me. I write for me. And you are GRADE A CORNY if you defend Stevie Nicks.

Check out this interview with Pharaohe Monch courtesy of “I Don’t Camouflage.” Apparently, he answers some rumors in here.

Email me your rumors at [email protected]