Jay Electronica Puts The Damn Thing Down For Nas! MTV interviewed Jay-E at the Made In America tour and he made it very clear about the ghostwriting claims by writer Dream Hampton. Nas is one of the gods—one of the …

Jay Electronica Puts The Damn Thing Down For Nas!

MTV interviewed Jay-E at the Made In America tour and he made it very clear about the ghostwriting claims by writer Dream Hampton.

After what he’s had to say and stic.man’s explanation, there is no doubt that those ghostwriter claims are BS. And the thing is, Jay-E is on Jay-Z’s team so there’s no need to fake claims.

Kim Kardashian: Kanye Is The Love Of My Life!

Kim Kakes was on “The View” today. Really nothing came out of it, but she did say that at this stage in her life, she was looking for a “forever” scenario with Yeezy. It was pretty basic and straight up. She wants to get married and have kids

According to TMZ, Kanye and them gave a copy of a song from Cruel Summer and that resulted in them finding a line where he raps about Kim K.

“Eat breakfast at Gucci. My girl a superstar all from a home movie.”

“Home movie.” Interesting way Kanye works it out in his mind, me thinks. Whatever keeps him sane. Anyway, the name of the song is “Clique”
and its on the way.

RELATED: Sydney covered this, but I had to make it official: EPIC FAIL.

My homey OchoCinco is the fail of the day. I know that he’s f**ked up in the game…or is that out the game? But, nevertheless, he’s gone and done a the move of a super fool! He tatted the face of his ex-wiz on his leg!!!!!!! He tweeted the following yesterday. Honestly, I didn’t write about it then because I thought it was photoshopped or tatted before the headbutt that got him an assault charge. 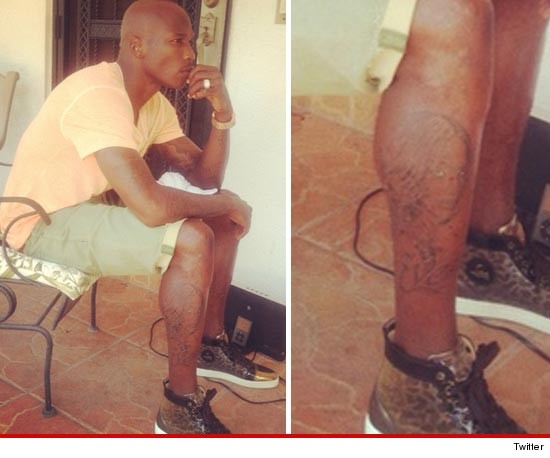