10 REASONS TO SEE THE AVENGERS!

Marvel’s ultimate movie project will officially hit U.S. theaters tonight at midnight and is set for one of the highest box-office weekends in film history. The Avengers is everything you could want from a superhero movie, summer film, or blockbuster and director Joss Whedon has pulled off the unthinkable and created one of the most entertaining films of all time.

Before we get into our “10 Reasons to See Marvel’s Blockbuster Movie: The Avengers,” let’s get the basics out of the way. The Avengers is the ultimate team-up featuring your favorite superheroes, most of which have already received their own solo films. Iron Man (Robert Downey Jr.), Thor (Chris Hemsworth), Captain America (Chris Evans), Black Widow (Scarlett Johansson), Hulk (Mark Ruffalo), Hawkeye (Jeremy Renner), Agent Coulson (Clark Gregg) and Nick Fury (Samuel L. Jackson) all reprise their respective roles from the Marvel Universe’s previous films and one together to put an end to Loki’s mission to essentially rule the Earth. If you need haven’t seen it already, check out the trailer here. (Editor’s note: There are some minor spoilers in this list.)

The Avengers is not only the best Marvel film to date, it’s also the funniest. This isn’t one of those “Tony Stark steals the show” kind of flicks either as you’ll see everyone getting in on the laughs from Thor to Hulk to Captain America and Agent Coulson. Of course you can always expect a majority of laughs to come from Robert Downer Jr.’s iconic Stark, but The Avengers makes it possible to make everyone look like the comedian of the group throughout the entire film.

This one is pretty self-explanatory. Scarlett Johansson in 3D, kicking major *ss as S.H.I.E.L.D. operative Black Widow. While a majority of people who have seen the film will tell you that Mark Ruffalo’s Hulk is the stand-out character, I’ll go on record and say that while that sentiment is entirely true, Scarlett’s Black Widow is not far behind. She gets plenty of screen time, some of the most intense fight sequences, and as a “human with skills” she holds her own against demi-god’s, super soldiers, and giant green monsters.

Thought that Stark’s suitcase suit in Iron Man 2 was cool? Just wait until you see what RDJ has up his sleeve for this go-around.

Dating back to Tony Stark’s first encounter with Nick Fury in Iron Man, every Marvel film has had an after-credits scene that built up to The Avengers. This film is no different and one of the extra scenes provides a great look at a possible foe for the superhero team in a future sequel. Make sure you stick around because there are two total scenes, the first being after the animated credits and the second following the total credits. Make sure you stick around!

The exchanges between Captain America and Iron Man, both verbally and physically, are some of the brightest moments of the film; of course you can’t just throw all these egos together and not expect them to duke it out once in awhile.

The heli-carrier, the Quinjet, the weapons, it’s all as awesome as you’d want it to be, but the real gem is Samuel L. Jackson’s Nick Fury. Whether he’s using words, fists or a rocket launcher, Jackson takes no prisoners as Fury and the fans can’t help but be glad that he does the character justice after his cameo-like appearances in some of the previous Marvel movies.

The Avengers is the definition of a a comic coming to life. All of the mayhem and destruction previously portrayed on pages fills the big screen with explosions, weapons, brawls, and superpowers that provide pure blockbuster entertainment. Without a doubt, The Avengers contains more action than all of the previous Marvel movies combined, so sit back and enjoy!

3. Preview Of What’s to Come From Future Marvel Movies:

The Avengers acts as an immediate sequel in a sense to the events of Captain America: The First Avenger and shows an adapting-to-the-times Steve Rogers trying to make sense of what he’s missed and how far things have advanced.

2. The Hulk We’ve Been Waiting For:

Fans have finally been given the big-screen Hulk they’ve been waiting decades for. We get to see Bruce Banner’s character in a more evolved state then fans will remember him from 2008’s The Incredible Hulk. Mark Ruffalo delivers gold as the character of Banner and the soul and movements he provides as a CGI monster are practically flawless. Watching Hulk “smash” is pure fanboy gold and one of the coolest things to witness on film as he decimates enemy after enemy in the most awesome fashion.

Yeah, like you really need another reason to see this movie! 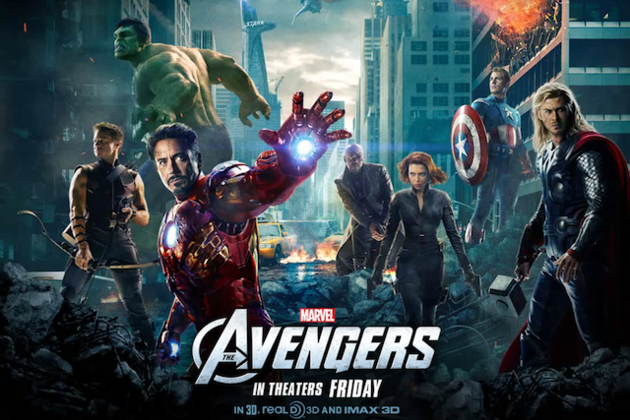