Kid Rock used to be down with Hip-Hop back in the day. Remember hearing this?

Me neither, but those are rap albums from Kid Rock in the early 1990’s. He even had Too $hort on beats.

RELATED: Beyonce Fans Bash Kid Rock Over His Comments About The Singer (PHOTOS)

Quite a lot has changed from this dude that once upon a time had an affinity for Black people, but not seems to have more of an affinity with hateful, Right Wing racists like Ted Nugent. So recently, Kid Rock proclaimed – a profanity-laced rant about Beyonce – that he liked “skinny white chicks with b#######.’ [Beyonce] doesn’t really f**king do much for me.” Who cares what he likes in a woman. What’s he mad for though? Does he need to get all extra racist-y when he disagrees with others on Beyonce’s talent? Or is Rocky p##### off that he had his only child (to date) with a Black woman? Perhaps, there’s that latent, hidden hate in the recesses of that redneck, hick, John-Deere driving mind that says “Kid Rock was a wack rapper that had to segue Rock to make it?”

Kid Rock has taken time to defend against allegations of racism so this notion is nothing new. In 2011, the Detroit NAACP honored Rock amid protests. “I love America. I love Detroit, and I love black people,” he told a local crowd as they booed him. He donated $50,000 to non-profit organizations in the area. Rock also has an affinity for the Confederate Flag, which he attributes to his adoration to rock gods Lynyrd Skynyrd. OK. That does not explain why in 2000 Kid Rock would invite a singer with a history of racist songs to tour with him.

Kid Rock is like the older, cranky decidedly racist uncle to some of the younger white rappers. When you talk about appropriating black music, vernacular and sentiments – and then letting it go when it no longer serves you – Kid Rock is king. At 44 years of age, he bears no resemblance to the guy that once idolized Run DMC or even that fellow that used rap-rock as a bridge to totally divest from the culture of rap. What a contradictory guy he’s turned out to be.

Some fans have taken exception to the racist label, namely those with no apparent racial reference point of view to begin with. So he screwed a Black girl in a bathroom and impregnated her. Does that somehow render him unable to be a redneck bigot (mind you he’s copped to the redneck part)? Oh…he rapped so he cannot be racist. Really, people? His view on Beyonce don’t make him a racist, because it is much more than that. He’s publicly claimed to love Black folk but so much more contradicts that assertion. Is Kid Rock racist? I don’t know. He rolls with racists. Maybe he’s not a racist. I don’t know any non-racists that chill with racists though. Then again, I’m Black. Who knows, Kid Rock? Only you.

Jerk? We can all have an opinion on that. 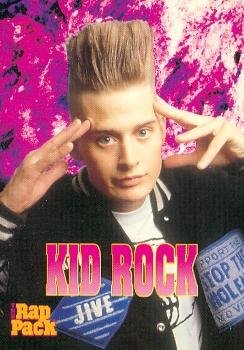 D-Nice Had The RIGHT IDEA!